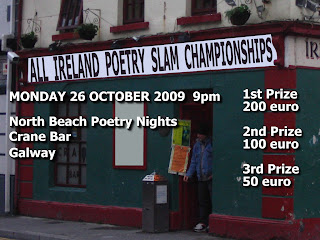 Congratulations to Craigavon's Séamus Fox for securing the first prize winnings of 200 euro at last night's All Ireland Poetry Slam Championships, in the Crane Bar, Galway.

Second was Stephen Murray from Cork and now resident in Galway.

It was all good fun and more about the doing than the winning. Judging poetry and performance is an on-the-night lottery, and often the difference between first and fifth is zero: but someone had to win, and Séamus was as worthy a winner as any.

The Crane bar (above in the photograph) is like the Cobblestones pub in Dublin: centre of the traditional music scene in the city, and the poetry takes place upstairs.

It was a locked out night, run under the aegis of North Beach Poetry Nights, host to the most vibrant Slam scene in Ireland: John Walsh, the organiser of North Beach, had his hand firmly on the door once it kicked off around 9.15pm, keeping it closed and turning away a few punters for whom the physical limit of the fairly roomy space, was such that it was impossible to fit everyone who wanted to come, in.

Next year it is Leinster's turn to host the final, number four in the Series.
Posted by Coirí Filíochta at 2:42 am No comments: