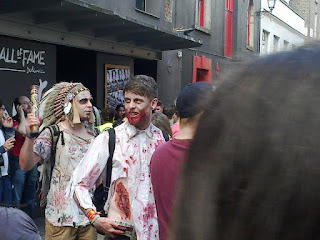 Killer-queen of Gamanraige, Maeve of Connacht, scored
her ancient song on pages time forgot, in life long ago

on a sham-rocked shore of island invention sung of since
the pre-Jesus era to a flight of Earls from Lough Swilley.

Goidelic Finn McCool: more apt to give than deny
the spear run wet through many a man, who fought

but hours amid years of hunting in woods, the final chief
fenian whose hair turned white prematurely.

Sreng. Beautiful to behold, harsh and inhospitable
Connacht Fir Bolg, who slew on the Plain of Pillars.

Nuada his foe at the first Battle of Moytura.

Arrow in the second by the king of light Lugh:
valiant and ruthless, crazed like a Norse-berserker

cast-list of kings on the island of myth, with women
behind a Wall of Three Whispers at Tara,

and Uisnech where Bridgit's first fire was lit.
A Cunning crafstwoman dyed in permanent overlap

between two worlds, who voiced the Uliad, wrought
a queen's acorn crop of severed heads to fiction

with he of two names in the Hall of Heroes
at the court of king Conchobar mac Nessa:

I care only that my doings live as myth
when I'm gone, not if die tomorrow or next year.

Culann's Hound; whose martial-art training ceased
in a friendship of thighs at the Fort of Shadows

on the isle of Skye, and was unwilling as O'Higgins
at O'Connors wedding, to kill the close companion,

pass sentence by one deft stroke in a single bout
of printed combat, alive in the ancient memory

cast from the foot like a javelin, was removed
by filleting Fediad's body apart; and slew all but

You lived the well ordered life with a chariot driver
and barley fed horses to war with, until the implement

predicted to kill a king did, and prophesy proved true
as your bowels spilled out on a cushion in the vehicle.

King Cú Roí's death avenged by son Lugaid. His father,
part of a roaming band of warrior bards who raided

spoil and slaves from the Isle of Man - stole Blathnat -
who loved you - of course - on first sight; your hero-halo

out-sparking the rival, who took her for part of his booty,
but she betrayed him to you, who said to the satirist:

Cúhulainn, now tied to a pillar of stone to die standing up.

Desmond Swords
2007, unpublished poem from an unpublished collection.
Posted by Coirí Filíochta at 5:53 pm No comments: