The Bristol born, Galway based poet, author and playwright Pete Mullineaux knows his way confidently around traditional Irish music. His poetry collection, Session, (Salmon Poetry), dedicated to his mother, with artwork by Fran McCann, is guaranteed to leave his readers wanting more.


The poetry, like the regional variations in the music, varies in style and tone, the common link being the poet’s voice as a silent observer. Mullineaux uses evocative images, insightful observation, humour, playfulness and nostalgia. He is a scrutiniser of intricacies, a watchful eye, someone who listens to the tunes and observes the people who play them. The reader sees the players’ eyes, fingers, their bodies, the body language and the resulting inter-personal and inter-musical relationships being formed. Mullineaux also explores the emotions and psychologies of his subjects with curiosity and admiration.

One of this writer’s favourites is A Piper Prepares, where the speaker intimately describes the uileann piper’s preamble. It is a tantalisingly visual poem with so much anticipation in the opening lines that the reader hopes the preamble goes on: It’s almost like shooting up; a captivating ritual / as the belt is looped around the forearm; the buckle/ notched, blowpipe joined to leather bag; a shard/ of cloth, folded between elbow and rib for comfort.

Mullineaux has the speaker in this poem watch the piper assemble the instrument and describe it in slow motion detail. ‘Drones are attached like pistol silencers, regulators poised,’ and while acknowledging the tune of the same name, ‘the piper’s apron,’ he remarks on the leather patch across the lap which provides ‘protection from the crazed jabs of the chanter, / its manic hypodermic dance.’ As the tune begins, ‘a primal hum vibrates,’ and ‘a gasp/ for air as the bellows fill and suddenly there’s life/ in the lungs and wind in the reeds...’

‘The Five Mile Chase,’ is a tribute to Patrick Street. Traditional musicians Andy Irvine, John Carty, Kevin Burke and Jed Foley have their individual stage movements noted and matched to rhythm, playing styles and character nuances. ‘A tilt of the chin for the pigeon on the gate/ a bend in the waist for the stack of wheat/ a wink in the eye for the blue eyed rascal/ a slip in the hip for a trip up the stairs.’ It’s a twelve line piece that could be sung in jig time. Hup!

Mullineaux uses a coupling motif throughout the collection. In ‘The Lads of Leitrim,’ an accordion and a flute player meet up regularly to play a session in a snug in Manorhamilton. The poet compares their ease and joy in the music to a long standing marriage. ‘Could there be a love closer to their hearts/ than this – something to cherish for a lifetime -/ never to part, for better or worse/ in sickness and in health.’ As they launch into the Fermoy Lasses, he declares ‘these fellas are wedded to the music.’

Another couple, Paddy Canny and Frankie Gavin, have their musical communion told with slow lyrical ease in ‘Cave Music II.’ Canny, ‘the elder statesman has eyelids drawn / tight like a mole,’ while the younger Frankie, ‘allows the older man the lead, follows the set tone/ finding his own empathetic touch.’

Mullineaux provides the snapshot, watching the young Gavin who could have closed his eyes, but chose not to. Gavin, who was ‘a generation apart’ at the time, kept watch of the older man, ‘aware how much this moment must be fixed, / treasured deep in his own vaults.’

Watching Dermot Byrne and Floriane Blancke’s playing compelled the poet to write ‘Tabhair Dom Do Lámh.’ Byrne’s accordion sits ‘like a sleeping child in his lap,’ and Blancke ‘leans forward, the harp/against her cheek, listening/ for a heartbeat...’ The poem moves swiftly from the womb analogy, to a child one, when Byrne ‘tickles and squeezes’ the accordion, and like an infant, growing with the pace and momentum of the tune, together, the duo, ‘fast forward, to courtship, / dancing, making crazy love / through music.’

This aptly titled collection, Session, by Pete Mullineaux is a gem. Encore, si’l vous plait? It is available from www.salmonpoetry.com, bookshops and music stores.
Posted by Coirí Filíochta at 11:39 am No comments: 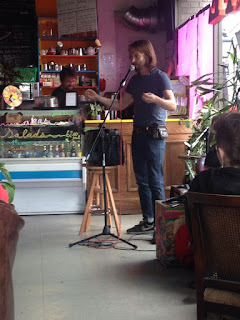 Ballymore Eustace's Hugh Cooney was in Edinburgh last weekend, after enacting something creatively mad in a positive sense; and a brilliantly executed piece of living performance art and storytelling - whilst having an ace time doing it. A former festival virgin on his inaugural Edinburgh Fringe or Bust performance storytelling art tour.

He hitchhiked from London to Edinburgh, over two days, with the live tracking of him by an online app; a diary of tweets, pics of the random folk that picked him up, and fb update-selfies by the side of the road with his thumb and a sign held out. Keeping his family, fans, followers and s/m friends abreast, engaged and emotionally involved in his (pron. kookullanary) Cuchualainary (copyright John Cummins Poetician) Cooney baloonae adventure hitchhiking from home in inner city Hackney, to the good crazee cultural stuff that is Edinburgh in the middle of August. All with the goal of reaching his 5pm Saturday slot at the Forest Cafe. He was slow getting out of London, and having lived there I know this was potentially the most difficult bit. Escaping the rat race. He had several short lifts up the M1, and had to turn back and go a different route the first night. On which he stayed in a country house retreat someplace in the midlands. He then went NW and made it to Manchester, then fairly swiftly the rest of the way once in the friendlier North of England.

Conducting national live radio conversations with the cream of professional Irish broadcast journalists and DJs manning the decks in Ireland, keen to give what the Irish call a dig out, for such a great and positive creative idea reliant solely on wishes and a prayer. Faith in the better and best human side of the sixty million people living in Britain.

Like the comedian Tony Hawks was reliant on when he hitchhiked lumping a fridge round Ireland after losing out on a drunken bet, that turned into the basis of an experience from which came a best selling book and film. A beautifully kind-hearted motorist adopted Hugh for a final big stretch of driving, only too happy to buy into his ever increasingly more real, and manifesting before our very eyes, mad Irish dream coming true on the road between London and the global Scottish thespian festival. And there was lots of love and good vibes by the time he reached his destination (Hugh pictured above doing the gig), with a few hours to spare to get ready and experience one of the four human joys, of what Amergin calls in his 120 line 7C Old Irish ars poetica, first translated by Galway University academic P.L. Henry in 1979 - and over twice as long as his other three poems (numbered seven, eight and nine at the link) far less interesting, imo, or understandable, rosc, druidic ogham-derived battle magic spells that Paul Muldoon can spend an hour or two cock a doodle doing about: 'the Joy of fitting poetic completion'. That comes with a 'turning or after turning' of one's three inner artistic cauldrons and interlocking spiral gyres, so that they spin upward with momentum of imbas, poetic fizz, literary energy, and facilitation of the open channel to Creation and one's ineffable gender-neutral mind's voice, mapping the individual voice closest to the contours of thought, as Newcastle West Limerick poet, Michael Hartnett, put it.

Cooney on his Blog puts it:


'Like one of the Seanchaí/Storytellers of old, equipped with only my stories (and of course some clothing, cash, sandwiches, voice recorder, shillelagh, go pro, wine skin and a phone). i’m approaching it very much as a pilgrimage to see what the buzz is. Should anyone want to hear my stories, perhaps I can tell them down an appropriate lane or in the bushes in the park. Or perhaps you know a suitable situation that would welcome such a vagabond?'

Lynn, created, with fellow Irish artist, Al Kennington; the Monster Truck Art Gallery on Francis Street in the Liberties, Dublin 8. The oldest most working-class part of South Dublin.  And it was the Monster Truck Art gallery where i encountered these two who created the poet in residence position i held there for several months. Both recent graduates, who'd graduated the same or a year before i had from Edge Hill.Hugh is one of the made-members of the island's most successful and highly secretive Irish art mafia. Hugh makes contemporary Art in numerous forms. Including food, music, and, what he is best known for, the crazee comedic performance art youtube comedies he scripts, performs, records, uploads, and then come, fall, show sit, sues reads the evidence, prosecutes, and often in drag, with a cast of characters drawn from the entertaining and artistically rendered phantasmagoria of his mind.